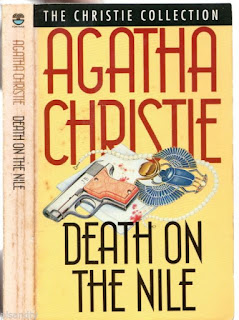 Death on the Nile (1937) is almost surely the most well known murder mystery-detective story with a ship setting in it, and it, like naturally many other Poirot stories, has inspired other authors of mystery stories to create brain crackers which follow in its footsteps. Stories such as the Twenty Year Old Murderous Intent (1999) in one of the most famous so-called new orthodox detective fiction series from Japan, Detective Conan by Gosho Aoyama, and the mystery parody novel Murder in Pastiche (1954) by Marion Mainwaring take after this classic Poirot story. It would be an understatement to say that back in the day Agatha Christie took the world by a storm - by her own words she says that no woman has ever made as much money from literature as her, in fact she is the number one most sold author of fiction in our history going head-to-head with William Shakespeare in the moolah wars. The prideful Hercule Poirot is certainly the personification of Agatha to a T down to the final novel, Curtain (1975) which was published after her death by her own planning, a fact which sends chills down my spine for couple of reasons...

Anyway, Death on the Nile, much like Murder on Orient Express, were heavy hitters in the series so much so that there have been multiple adaptations of them but personally out of all the adaptations of this series I do very much prefer the super long-running TV series, which ended in 2013 after running for ~24 years, starring David Suchet as Hercule Poirot. I think the guy is damn fantastic and the series is one of the best shows, and adaptations (with ups and downs here and there as in any other series), period. To me the difference with him as an actor compared to someone like Peter Ustinov from the 1978 DotN film adaptation is massive. Still, the original novels are as good as it gets even if some of the adaptated episodes do live up to them surprisingly well.

And as we are on the subject of adaptations, Death on the Nile is getting a new movie adaptation in 2022, possibly due to the success of 2017's adaptation of Murder on the Orient Express. I was certainly disappointed in the 2017 movies but there's always potential for these type of movies to hit the jackpot, I think. The extremely high quality cinematography in today's movies especially can give us an unforgettable experience, so I'm still interested in seeing the movie adaptation of Death on the Nile in 2022.

The millionaire heir Linnet Ridgeway, a beautiful young 20-year-old woman from the massive Wode Hall residence, is about to get married to Charles Windlesham who also comes from a rich family; match made in heaven. Everything about these two was seemingly perfect to the bywatcher which caused them to be the hot topic for every newspaper agency around, but as fate would have it, things were not going to progress so smoothly for the young pair. From a normal person's perspective Linnet is on another tier, so to speak. She inherited her father's business wits, and she has money to buy anyone as well as the looks to charm anyone, and the world knows this; what Linnet wants, she gets- and all she has to do is ask to get it. Before her marriage to Charles, she gets a visit from one of her oldest friends, the poor girl Jacqueline de Bellefort who has never asked anything from Linnet, but now she has a request to make: "As you will remodel Wode Hall to become even bigger, please hire my future husband to work for your estate, if Simon is not doing his job well enough you can fire him but give him a chance, please do it for me!"

Months pass and the steam ship S.S. Karnak is about to sail around Egypt once more, traveling through the Nile river. The old, retired and great Hercule Poirot is getting ready for his vacation, but people want to hear him talk about the greatest murder cases which he has solved - too bad for them though as that would be considered as work, so they're not getting answers while he's on this vacation! And as he's waiting, Poirot runs across a woman with hate in her eyes as she looks at two people living the happy life, the newlywed Simon Doyle and Linnet Doyle have just gotten married and are on their honeymoon! So, as things would have it, the beautiful Linnet never married Charles, but instead her friend's future husband Simon!

The story then kicks off into high gear as Jacqueline de Bellefort claims that she would do anything to get back at Simon as he belongs to her and openly admits two things: (1.) She has a gun with her and is willing to pull the trigger, but does not know on who exactly, so that's why she still has not done so, and (2.) her mission is to make Simon and Linnet feel pressured by her constant following. The mystery part here is quite simple: how exactly does a poor girl like her have the money to follow the wealthy pair around the world?

Linnet and Simon decide to sneak onto S. S. Karnak without telling the presses (that keep publishing news on anything Linnet does) where they are headed, yet Jacqueline somehow follows them there as well. On the first stop of Karnak around Egypt, Linnet gets almost crushed by a massive boulder while Jacqueline was still inside the ship. Was it an accident? Poirot ponders as evil thoughts crawl to the back of his head. That night things would take turn for the worse as Jacqueline de Bellefort and her ex-boyfriend-and-now-her-friend's-husband Simon Doyle get into an argument in front of people in the bar area of the ship. Things get so crazy that Jacqueline ends up shooting Simon so that the bone in his leg happens to break from the bullet. Due to the shock, Jacqueline throws the gun to the floor and kicks it away from where the eye can see while having suicidal thoughts and Simon tells everyone else to not tell anything about what just happened to his new wife as that would bring about a scandal.

Next up things quickly take a surprising turn for the worse. It's as if the devil itself had heard Poirot's thoughts as our main character wakes up the next morning to his old friend Colonel Race tell him the hard facts that Poirot was almost expecting: Linnet Doyle has been murdered the previous night. While she was sleeping, someone entered the room and popped a bullet from a silent small caliber gun, which happens to be Jacqueline's gun that had been thrown kicked away after yesterday's incident, through her brain. Other mysteries also take place in this well paced story that still does not feel overwhelmingly information heavy as Race explains that there's actually a ruthless killer on the ship that the law enforcement calls "X," and Linnet's costy neck pearls have also gone missing. Could her suspicious latin maid have stolen them? The maid whom Poirot and Race are to find murdered below her own bed on S. S. Karnak when she also goes missing.

Now, I decided to reread and review Death on the Nile because for a couple of reasons; never got a chance to write about it and I wanted to see how it in particular compares to Ellery Queen's hailed fair-play stories that I've been getting into. Can I see what made the series so much more popular in comparison to every other series? and I think I managed to get a glimpse towards that direction. You see, Queen's works are very information-heavy, the cast of characters leave much to be desired but they're never what I'd say is "bad" per say. The stories are just very mechanical, and the cases are heavily planned and that's pretty much the purpose of the entire series - it's impressive to say the least, however... Agatha Christie's writing style for the Hercule Poirot series is also fair-play, but the dialogue and text is not overwherlming to the reader. It's much more, hmm, novice-friendly type of a series and I really enjoy the storytelling in Christie's works - there's a slight sense of adventure.

Due to the short chapters with neatly laid-out dialogue that focuses on making the case-cast along with Poirot himself more interestingly and creatively integrated into the actual story surrounding the cases, it's very easy to read to the next check-point without a break to mull over things. The pacing of this particular novel was pretty superb and it has aged like fine wine - it's about 250 pages and without any overflow of information, but still managed to be sneakily filled with events that makes the ending contain three different possible solutions as to who the possible culprit could be (note: in comparison Greek Coffin Mystery by Queen is a heavy-information novel with over 400 pages - it's certainly for slightly more veteran readers, I believe Christie's novels are more digestible to anyone who wants to get into detective fiction, which would explain popularity Christie managed to accumulate with these books).

The cast of characters is pretty decent as well, varying from a mother-son duo on vacation to an alcoholist and a latin housemaid, however due to the averagely short length of the novel - which does make it very easy to digest as well - none of the characters were fully realized, I feel, but in the end the story still managed to be neatly weaved together with only couple of obvious twists to it. I was certainly disappointed in the identity of Killer X and how that part of the story was handled from the hints to the reveal, considering how it was set up as a legitimate plotline. But it's not that big of a deal. Neat story with a nice ship setting, neat characters as always and a quick nice ending to the story it wanted to tell.